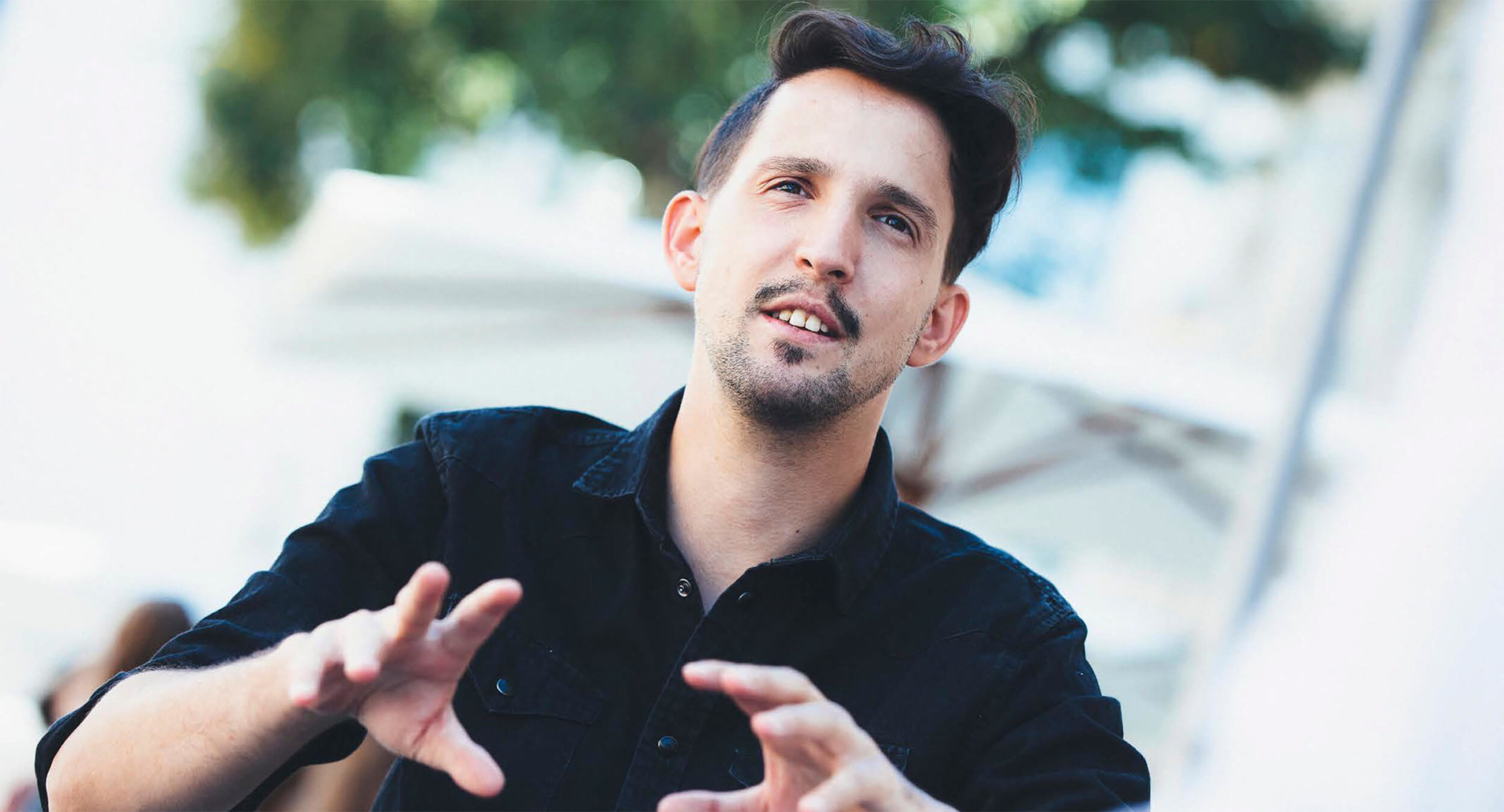 When I first saw an opera in 1991 (“The Magic Flute” at the Graz Opera House), I knew which way I wanted to head in my life. Already as a little boy I became a regular guest at the Graz Opera House . At the age of 16, I began to intern at the Graz Opera House and was thus able to work with Vera Nemirova and Tatjana Gürbaca. While I was in the middle of my written and oral higher school certificate in 2006, I passed the admission exam for the University of Music and Performing Arts Vienna. During my studies I worked as an assistant director in Vienna and St. Poelten.

I completed six semesters of the opera classes of my professors Michael Temme and Leo Plettner and then, from October 2009, I attended the opera classes of my professor Paul Esterhazy. As part of my studies, I assisted my professors in various productions at the Neue Studiobuehne and the Schlosstheater Schoenbrunn and I also directed “The Telephone” by Gian-Carlo Menotti and “La Serva Padrona” by Giovanni Battista Pergolesi. On June 25, 2010, my graduation production “The Medium” by Gian-Carlo Menotti was performed in the presence of my professors Gabriele Lechner, Reto Nickler, Didier von Orlowsky and Karlheinz Hanser . I graduated with honors.

At the Schubert Theater Vienna, I staged “Elling” by Axel Hellstenius in June 2009. It was a pleasure to stage the thriller “Was geschah mit Baby Jane” (“What ever happened to Baby Jane”) with Manuela Linshalm, an actress perfectly suited for puppetry, who had already proved her puppeteer skills before in “Schlag sie tot” (“Beat them to Death”) and “Freaks”. The premiere of “Baby Jane” took place on February 17, 2013.

On October 17, 2014, “Das Missverstaendnis” (“The Misunderstanding”) by Albert Camus premiered at the Schauspielhaus Graz. The audience was enthralled by the performances of the actors and puppeteers Seyneb Saleh and Florian Koehler, who not only had to master the demanding text but also the art of puppetry. The stage set by Jakob Brossmann was noted with praise as well as the costumes by Denise Heschl. Heike Mueller-Merten, chief dramaturge of the Schauspielhaus was an active support to me as a performing director. In 2015, the production was adopted by the Volkstheater Vienna and was invited to guest performances in Karlsruhe (State Theater) Fuerth, Leipzig, Zurich (Schauspielhaus Zuerich) and the National Theater in Porto.

The play “Böhm” by Paul Hochgatterer, which was written on my suggestion, deals with the international career of conductor Karl Böhm, born in Graz, who was a very willing and adapted careerist in the National Socialist era. The solo piece was premiered on March 22, 2018, at Schauspielhaus Graz (Direction and puppet design by Nikolaus Habjan, assistant stage direction by Martina Gredler, stage design by Julius Theodor Semmelmann, costume design by Cedric Mpaka, dramaturgy by Elisabeth Geyer, performer Nikolaus Habjan).
“After barely a moment of shock, you forget that you see puppets in front of you. And at the end of this incredible, successful show, which was frenetically acclaimed by the audience, Habjan after all pushed Karl Boehm from the pedestal. A simultaneously oppressive and liberating image.”
(Martin Lhotzky, Frankfurter Allgemeine Zeitung, March 24, 2018)

The Carinthian poet Christine Lavant described in her novella “Das Wechselbaelgchen” the fate of a disabled child who sacrificies her life in the rescue of her healthy little sister and finally dies. Heinz Sichrovsky writes in the magazine NEWS on December 7, 2015: “They hired the ingenious puppeteer Nikolaus Habjan as the director, which was the lucky choice of the production . Stage designer Jakob Brossmann put three antique museum showcases on the set. There, the characters remain as motionless exhibits before they become alive to perform the passion play about the small, tormented girl Zitha. Habjan himself does not perform this time, but the actors are perfectly trained to handle the life-sized puppets. The Wechselbaelgchen is such a puppet, as well as the pastor and the little sister in her monstrous prettiness. The magic of the puppet scenes is enormous, and they instantly reflect the irrational cruelty inherent to the text.”

The premiere was at VOLX Vienna on December 4, 2015. Subsequently, the play was also performed in the hometown of the poetess in Wolfsberg / Carinthia on June 5 and 6, 2016.

“Wien ohne Wiener” (“Vienna without the Viennese”) a musical revue based on Georg Kreisler by Nikolaus Habjan and Musicbanda Franui . The premiere was on October 11, 2017.

“It is a more than unusual evening that Nikolaus Habjan brings to the Volkstheater: the director and puppeteer has definitely landed a coup with this evening of Georg Kreisler songs. The almost two hours are simultaneously cheerful and gloomy, snappy and charming, when six actors, nine puppets and the East Tyrolean music band Franui try to get to the bottom of the Viennese soul.”
(Sonja Harter, Austria Press Agency)

This production will be performed again in May 2019 by Theater an der Wien.

A cautionary tale about the danger and intrigue of seduction in which a prince and his beloved have committed themselves to settle once and for all the dispute on who is more unfaithful in love, men or women?

On June 2, 2018, at Schauspielhaus Zurich/ Schiffbau Box, there was the premiere of “Ausschliesslich Inländer – ein Georg Kreisler Abend” (“Exclusively natives – a Georg Kreisler evening”. Georg Kreisler, songwriter / cabaret artist and composer, an American immigrant who suffered from his Austrian origin, used to live in Switzerland for a few years, which inspired him to write some “vicious” songs, which in the course of this production are reinterpreted by Musicbanda Franui.

Direction and puppet design by Nikolaus Habjan, stage design by Jakob Brossmann, costume design by Denise Heschl, text and music by Georg Kreisler, musical adaption and composition by Markus Kraler and Andreas Schett, musical direction by Andreas Schett.
Performers: Benito Bause, Nikolaus Habjan, Claudius Koerber, Miriam Maertens, Michael Neuenschwander, Elisa Pluess, Musicbanda Franui.
The newspaper Tages Anzeiger Zuerich (Alexandra Kedves) reviews: “Even the actors approach top form when they have to immerse into these existential fears described by Georg Kreisler, while they pull the strings of the puppets, whose heads can by the way be removed in a horrific hamlet-like way. Bause confronts us with the fact that we are killed by the monotony of everyday life (“Home is death”) while Maertens handles herself virtuously from the “Sunday stroll” to the “Window hinge” on which she will hang herself one day: A terribly great experience! In between, freaky hallucinatory images, toll booths with teeth and wandering giant eyeballs shock the audience. You have to look away and stare at the same time. Director and puppet master Habjan turns ingenious cabaret into grand opera.” 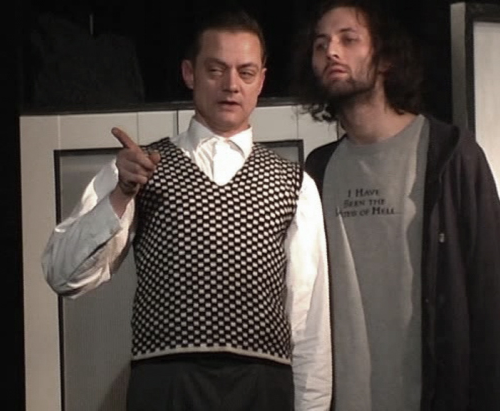 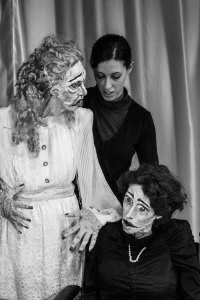 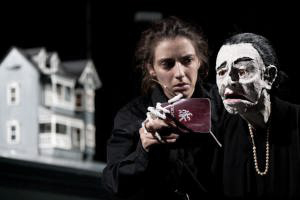 We use cookies to ensure that we give you the best experience on our website. If you continue to use this site we will assume that you are happy with it.AcceptMore information